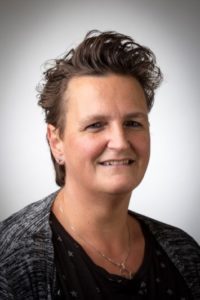 Audrey Alards is the new chair of the Sex Offender Expert Group. She is a graduated social worker and has the degree of Master of Laws in Forensics, Criminology and Law.

Since 1994 she works for the Dutch Probation Service. She is specialised in working with sexual offenders and in the method of Circles of Support and Accountability (CoSA).

Her current work as a coordinator and counsellor for CoSA focusses mainly on the support and management of volunteers who work with sexual offenders. In addition, she advices European professionals in implementing CoSA projects in their country and is one of the co-founders for the association called CirclesEurope.

The 25-year-old Anne Faber from Utrecht disappeared on Friday, September 29, 2017 during a cycle tour between Utrecht and Huis ter Heide. On October 9, the 27-year-old Michael P. was arrested after his DNA was found on Anne’s coat.

Michael stayed in a forensic psychiatric clinic in Den Dolder where he was being prepared for his return to society after a 12 years prison sentence for raping two teenage girls, several robberies and possession of a weapon. After a few days Michael pointed out where he left Anne’s body. She was found on the 12th of October 2017 in the forest of Zeewolde. This was a hang-out place where Michael spent many hours during his teens.

I remember that the Dutch society wondered: ‘What and who made it possible that Michael was on leave without any kind of supervision’. This started a whole discussion around treatment and risk assessment for sex offenders in the Netherlands. Discussions in the media blamed our experts and called out to change the whole legal system when it appeared that many offenders do not cooperate in psychiatric research and present risk assessment tools. Forensic professionals (judges, prosecutors, forensic psychiatrists, probation officers, etcetera) had been struggling for many years in such cases.

This fact has been the news of the Anne Faber case. Suspicious Michael P. was already convicted of a gruesome sex crime, but was not imposed by a so called TBS measure at the time, because he did not cooperate in psychiatric research. TBS is a special measure that the courts can impose on people who suffer from a personality disorder and/or a serious mental health illness and have committed a serious crime.

Shortly after the Dutch society had recovered from the shock derived from Anne Faber’s death and in this context, Corinne Dettmeijer-Vermeulen, the National Reporter on Trafficking in Human Beings and Sexual Violence against Children, presented her research report “Weighted Risk” in which she wrote that our work on trying to lower the risk of recidivism of sex offenders should be improved

In the factsheet we can read:

Conclusions of Dettmeijers research report are:

The National Reporter on Trafficking in Human Beings and Sexual Violence against Children recommended:

To the Minister and Secretary of Security and Justice: ensure that the risk of recidivism is assessed using the best available method, and is used to appropriately sentence sex offenders to treatment. This recommendation is further elaborated upon through the following recommendations:

(Click on the link to read everything about Dettmeijers report.)

Acting after a worst case scenario

In 2017 the Dutch Probation Service trained some probation officers (who work with sex offenders on a daily basis) to work with actuarial risk assessment tools such as STATIC-99 (based on historical, static, non-changeable risk factors), STABLE-2007 and the ACUTE-2007 (measures changes in risk status over time by assessing changeable “dynamic” risk factors).

One of my missions as the new chair of the sex offender Expert Group and the CEP will be that other European countries and CEP members also learn from our reflective lessons.  I want to advise probation officers (and other professionals who work with sex offenders) to use actuarial risk assessment instead of predicting with gut feeling. From now on think of the Risk-principle, even after working with sex offenders and having many years of experience.

“Nobody wants sex offenders to make more victims. And yet, in the Netherlands, we are not doing everything we can to make that chance as small as possible.”

Let us prove that Dettmeijers is wrong. We are going to make that chance smaller by training all probation officers in Europe how to use the STATIC-99, STABLE-2007 and the ACUTE-2007.

I know now that it is worth the investment. Learning all about risk assessment, we need to know it! As our mission in CoSA says: we want no more victims. For this reason, I call out to all European countries to ensure that the quality standards of the risk assessments are brought on an equal footing, as being a member of the CEP.

The first step in my mission is to invite you to our conference called “Reframing Sexual Abuse: Practical Directions”, taking place on 22 and 23 November 2018 in Riga, Latvia. This conference is aimed at practitioners, mainly probation staff. I hope to meet you there!

If you have any questions about the expert group or about working with sex offenders, you can contact Audrey Alards: a.alards@reclassering.nl.