On December 22, 2021, the Ministry of Justice of Georgia presented PROBBOX – an innovative device providing electronic control and services to probationers, created by the National Agency for Crime Prevention, Execution of Non-Custodial Sentences and Probation. The highly anticipated event was attended by the Minister of Justice of Georgia, his deputies and the representatives of the diplomatic corps. Minister Rati Bregadze, Deputy Minister Buba Lomuashvili and Deputy Head of the Agency Vladimer Kheladze have emphasized the importance of the novelty in achieving the strategic objective to develop and implement high-technological services in Georgia and expressed strong willingness to introduce it to the partner countries.

Reform of the probation system

With PROBBOX, Georgia has embarked on a large-scale reform of the probation system, the necessity of which was caused by several key factors: the need to ensure greater anonymity of probationers during the fulfillment of their obligations and access to services, the lack of probation bureau offices in certain municipal locations and the necessity to save human resources while expanding Agency’s capabilities.

The electronic control mechanism for probationers was introduced in Georgia in 2009, under which, until December 22, 2021 probationers were registered only at probation bureaus. The existing practice and research have clearly shown that the probability of being identified as a probationer during their obligatory visit to probation bureaus was a significant inconvenience for convicts. Meanwhile, the lack of probation bureau offices in certain municipal locations has been an obstacle for many probationers in terms of meeting their obligations and access to services on time, while building such offices would require additional expenses and human resources. Such conditions have been aggravated by the epidemiological situation in the country caused by the spread of the Coronavirus.

Given these circumstances, the Agency set the objective to create an innovative mechanism through which the electronic control of probationers and their access to appropriate services, along with probation bureaus, would be available in alternative buildings, without additional human resources.

To achieve its goal, the Agency has created PROBBOX, which was introduced, as a pilot project, in the Public Service Halls of Tbilisi, Telavi, Gori, Kutaisi, Zugdidi and Batumi on December 22, 2021. For the first time in Europe, the control of probationers and provision of their services, along with probation bureaus, has become possible in the premises of other organizations. 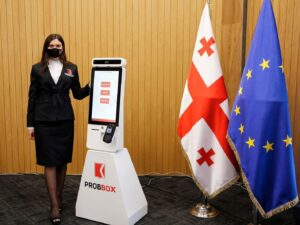 In accordance with the 10-year Strategic Development Plan of the Ministry of Justice and the Strategic Development Plan of the Agency, by 2030, 250 PROBBOX devices will be installed in Public Service Halls, Community Centers and municipal buildings of Georgia, to greatly enhance the anonymity of probationers and significantly increase the geographical area of probation capabilities.

POBBOX operates with Georgian-made software. After three-level authentication through fingerprint and face recognition technologies and personal identification data, the probationer logs into a personal account that is connected to the Agency’s probation database.

It is important that PROBBOX also provides services for the ordinary citizens, since it includes functionality to book a video call with an imprisoned convict and will soon enable money transfer to the latter and registering certain types of hard copy documents.

“These devices have formed a comfort zone for us, it is something that will help prevent our stigmatization.” – says a young musician on parole, who voluntarily demonstrated PROBBOX capabilities in front of the leadership of the Ministry.

“PROBBOX has changed the traditional nature and course of probation in Georgia, as we have moved this process into a self-service dimension. We have installed PROBBOX devices away from the probation bureaus to provide more anonymity for our convicts. For example, in Tbilisi Public Service Hall, where thousands of citizens cycle to receive various services every working day, the device is located in a remote place where probationers get access with almost no interaction with the rest of the citizens. We are pleased to have positive feedback from our beneficiaries and we are confident that along with the gradual increase in the number of devices installed throughout the country, the large-scale reform of our probation system will be successfully completed.” – declared the Deputy Minister of Justice of Georgia Buba Lomuashvili.

More than a month has passed since the introduction of PROBBOX and there has been recorded over 50% of probationers in Georgia’s 6 major cities opting for the technological novelty over the traditional way of meeting their obligations, with no malfunction of the software or technical failure of the device reported.

By the end of January, the Ministry of Justice of Georgia introduced its technological achievements in Yerevan, where PROBBOX was met with great appreciation and interest by the Armenian side. Such a positive start of international appearance opens opportunities for PROBBOX to have its fingerprint on transforming probation systems in the neighborhood and beyond, as the Georgian side will actively continue to introduce its novelty to the partner countries.