Probation in Ukraine in wartime

Home / Probation in Ukraine in wartime

During wartime almost 3,000 probation staff of the Public Institution “Center of Probation” continued to work. They performed public tasks of executing criminal sentences which are alternative to imprisonment and prevention of repeated offences to enhance public safety.

Now the working day of probation staff in Ukraine is not restricted to the work schedule. In addition to performing official duties, the staff is actively involved in improving the defense capabilities of Ukraine. They assist the internally displaced persons and those remaining in hostile territories or settlements under occupation.

All the probation staff contributes to society through volunteer work for meeting various needs of Ukrainian citizens and address the most pressing challenges in the country: weaving camo nets and raising funds for military ammunition, preparing food – dumplings, baking cakes and making stews. They have also joined call centers and humanitarian hubs, providing housing and employment of displaced persons, including probation clients.

Since the beginning of the war in Ukraine, in conditions of real risk to life (due to active hostilities or temporary occupation of territories by the invaders of Russia), more than 400 staff members of probation units were forced to move to safer regions of Ukraine. Nevertheless they all continue working remotely, staying in touch with probation clients, working with documents and communicating with the courts.

200 female staff members had to move abroad taking care of the lives of their children and their elderly parents. They are currently in touch with their managers. Unfortunately they cannot continue their work in accordance with the Ukrainian legislation. After returning to Ukraine, they will be able to resume work.

The war became a serious challenge for all people and organizations in Ukraine. The leadership of Center of Probation and the Heads of the Probation Offices had to promptly resolve many work and daily life issues: take the necessary organizational measures to protect official information, preserve material values ​​and the lives of staff. There was the necessity to temporarily limit access to the Unified register of the convicted and detained persons. Currently access to the system has been restored for most of the probation units. 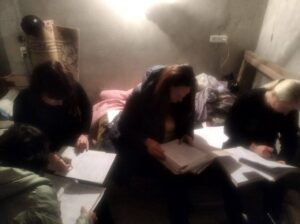 New communication channels have been established to ensure constant communication, both externally and internally. An open channel for psychological counseling of the citizens with the involvement of probation psychologists was created in “Telegram Messenger” app.

The situation in Ukraine changes every day. Due to the great courage and professionalism of the Ukrainian military, part of the settlements are being liberated from occupation and pre-war life is being re-established. Probation units in those areas are also returning to their usual mode of operation. Unfortunately, at the same time, the location of rocket shelling is changing too. Therefore, in some regions, probation staff have been forcing to work in special shelters or basements of their homes.

The whole staff of the national probation system are in touch almost on a daily basis, and the situation in different regions is monitored closely. Currently there is no connection with several officers who are in areas where hostilities continue or that are temporarily occupied by the invaders. All possible measures are taken to determine their fate.

Ukrainian probation is a part of the pan-European probation family. Among others it has close ties with the Latvian State Probation Service. Intensive cooperation between both of them started in 2018 when memorandum of cooperation was signed. During the last five years several joint activities took place where both organizations learned more about each other. The cooperation included the sharing of experiences promoting the introduction of evidence-based methods and developing the volunteering in criminal justice sector. In order to learn the experience of Ukrainian friends and colleagues , the Latvian State Probation Service met online with their Ukrainian colleagues. Among the participants were directors and their Deputies of both organizations, and representatives from regions of Ukraine who gave first-hand account of disasters caused by aggression of Russian military forces.

In the meeting Latvian probation managers and the representative of the Latvian Ministry of Justice expressed the solidarity with Ukrainian colleagues in these hard times. Ukrainian probation shared their experience in working during the time of war. The topics in conversation included the communication with employees in occupied territories; specifics of supervision and community work, data protection and safety measures for probation employees. Latvian probation also learned about needs and challenges of Ukrainian colleagues. The whole conversation was recorded and available on Russian language with English subtitles here.