“I don’t know what kind of people you talk to, but I am a family-oriented guy”

Home / “I don’t know what kind of people you talk to, but I am a family-oriented guy” 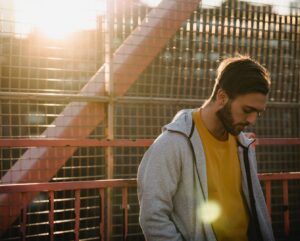 “I don’t know what kind of people you talk to, but I am a family-oriented guy” – Managing the Spoiled Identities of Domestic Abuse Perpetrators

How we perceive ourselves impacts on how we move through the world. It is human nature to want to be seen as ‘good’ or ‘valuable’ to others, and we will work hard to protect our ‘good-selves’ from external threats. So, what happens when these closely held identities become spoiled by the things we have done? How does an individual retain a sense of goodness when the acts they have committed, especially acts which hurt or harm others, become who they are seen to be? Drawing on selected findings from research funded by the UK Home Office’s Domestic Abuse Perpetrator Research Fund 20/21[i], this article considers the way stigma and shame impacts on the narratives of domestic abuse perpetrators, and the subsequent strategies used to preserve morality and ‘goodness’.

Erving Goffman, in his classic text Stigma (1963), examines how individuals seek to protect their identity if it is seen to depart from a socially acceptable or approved standard of behaviour. Where this fails, Goffman argues, that identity becomes devalued or ‘spoiled’. Consequentially, the individual is denied social acceptance. Though shame and stigma are issues faced by most of those labelled ‘offender’, these notions are particularly prevalent amongst those who hurt and harm vulnerable others e.g., men who enact abuse against women and girls. In 2021, we conducted narrative interviews with 10 men (aged 22-53), all known to the Criminal Justice System (CJS) as perpetrators of DA. We explored their narratives using their own words, and through their own lens of reason. We looked at the commonalities in their lives, especially their younger lives, and considered the various social and psychological factors they drew on in explaining their pathways towards perpetration. However, we also took a critical view. Here we considered why and how these narratives were being told. Specifically, the participants’ investments in preserving certain identities, their motivations towards future DA perpetration, and the relationships they had with systems of power – specifically, ones that were in the position to issue labels of ‘risky’ and ‘rehabilitated’. The following findings are drawn from this second part of the analysis.

In defending against the stigma and shame of the ‘domestic abuse perpetrator’ label, participants sought to reject other negative identities, seemingly to preserve some sense of goodness. For some, this was achieved through contrasting themselves with problematic others. For example, troublesome friends and crime-prone peers. However, when it comes to DA, the justification that ‘it wasn’t as bad as what the next guy did’ is much harder. To counter this, abusive behaviour became the consequence of something else – in most cases, the over-arching power of substance addiction. In protecting their good and moral selves, the intoxicant was placed as ‘the bad thing’ and not the individual using it.

“I know there is more to me than the anger and the drink and the drugs, that I’m a good person that people should actually see, you know?” (Aaron)

Telling stories of violence against women 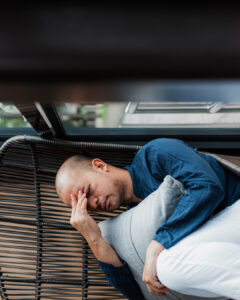 ‘Good’ and ‘moral’ identities appeared particularly under threat when it came to talking about DA perpetration. Stories of men causing hurt and harm to women are rarely received well. As such, participants recounted their behaviour in particular ways involving justification, mitigation and denial. Though these techniques are well known to probation professionals, their usage is usually explained in terms of the individual failing to take responsibility for their actions. Though this may be the case, telling stories in this way also functioned to preserve damaged identities. We termed these the ‘both to blame’ narratives, the ‘de-escalation’ narratives, and the ‘resistance and denial’ narratives.

‘Both to blame’ narratives – Stories framed in this way saw participants explain their violence through the lens of reciprocity – both parties had their role to play. Typically, in these accounts, violence was explained as the outcome of volatile and toxic relationships, where both parties were equally culpable.

“But at the end of the day, it was one of those relationships where either of you feel the need to hurt one another, and you’ve got to step out of that relationship. As much as you might think you love that person… it’s not healthy for anyone. People who love each other properly, they don’t hit each other.” (Gary)

De-escalation narratives – These saw participants minimise harms done, or place harms done as a necessary measure to stop further or more serious outcomes. Terms such as ‘ushering’, ‘tapping’, ‘placing’ and ‘pushing’ were commonly used, and typically with qualifiers such as ‘just’, ‘slight’ and ‘little’. In addition, explanations of actions were always in the context of external provocation.

Resistance and denial narratives – This tended to occur where participants did not seem to understand their charges of DA or where they felt their actions didn’t warrant the label. Accounts of violence were explained away in the context of not being entirely clear what officially constituted DA.

“That’s what the police and the judge said, that even touching, like touching a finger, is an assault. Even my wife said to them in the court that I didn’t beat her. It didn’t [become] physical, but the court said no. Touching is an assault.” (Tariq)

Justifying male violence against women – Finally, managing spoiled identities was in the preservation of masculinity. In tackling this, two approaches were used. The first was in ‘drawing the line’. In this instance, though violence was acknowledged, it was argued as proportional to the situation and their partner’s gender. They were just trying to stop the violence escalating. The second was in contrasting behaviour with what would have occurred had the other individual been a man. It was argued, had this been the case things would have been substantially more violent. Masculinity was thus preserved in the restraint of not having done worse.

“Even all the times I was so angry and I felt like, “If you were a bloke right now I would be going to prison because I would have fucking beat the shit out of you.” That was always going through my head. I never once did that.” (Travis)

The perceived consequences of spoiled identities 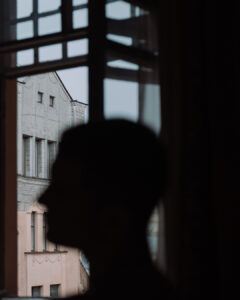 Arguably most interesting was in what spoiled identities meant in terms of perceived consequences. Participants indicated their awareness of the CJS’ power to give and withhold certain identities – specifically, ones which placed them as rehabilitated and ones which placed them as still posing a risk. For the participants, all of whom wanted to move on with their lives, and most of whom wanted to reunite with a partner, these labels became barriers and facilitators to achieving that. As such, and often despite other issues and complaints they had, they tended to promote their compliance and positivity, both towards the systems that held them and towards the processes and tools used to rehabilitate them. There was a sense from some that showing anything other than this may end badly for them. Indeed, ‘Simon’ in responding to the researcher’s query about whether he saw himself reuniting with his partner again revealed,

“Yes, that’s what I want, and do you know what, I didn’t say anything to my probation officer about it, because there’s so much speculation out there about guys that are being controlling, trying to force them into decisions they don’t want to make”

Simon’s perception of his identity as a coercive, controlling DA perpetrator saw him unwilling to share his plans with his probation officer for fear of what might happen if he did.

The implications of these brief findings are helpful in thinking through the ways in which identity might play a part in how men convicted of domestic abuse embrace or resist change. They are also useful to DA perpetrator programmes in considering how the label of ‘perpetrator’ might impact on how someone engages with them. Indeed, progression through most cognitive-behaviourally informed rehabilitation programmes requires the participant to acknowledge their own culpability as a start point. If someone does not see themselves as a perpetrator, does not recognise what they did as abusive, or feels that being labelled as ‘perpetrator’ means they might suffer some unknown consequence, we might well question how meaningful change can ever take place.

A copy of the full report can be found by following this link: The-Complex-Pathways-to-Violence-in-the-Home.pdf (interventionsalliance.com)

[i] Please note: The views reflected in this research are not necessarily those of the Home Office.