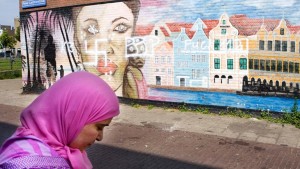 With the project Oumnia Works, the Dutch municipality of The Hague aims on mothers as a weapon against radicalization.   Mothers often feel that their children radicalized. They have a ‘gut feeling’, but usually do not come into action. If their child is traveling to Syria or is arrested for a crime with terrorist intent, they are left with the cry of despair ‘if only I had … “. Support Centre Sabr, a women’s organization in the Dutch city of The Hague answers to this need by launching the ‘Oumnia works’ program where mothers learn what they can do to prevent a radicalization process in their child’s mind. In ‘Oumnia’ are two Arabic words. Oum means mother and nia ‘hopeful’. This double meaning is the idea behind this training: mothers are the hope for the future.   “We see a gap between parents and children,” explains Karima Sahla, director of the initiating organisation Support Centre Sabr. She is a mother herself from the infamous Schilderswijk district and has been assisting relatives of radicalising young people since 2005.  “Children can radicalize under the powerful influence of social media, but many parents have no idea what their son or daughter see on the iPhone and computer. They are shaken by surprise when their child is already on their way to Syria. And then it’s too late. ”

The aim of the project for and by mother’s is to make women aware of the risks that their children face. It is based on the experiences of Muslim mothers themselves. Who often struggle with adolescence of their children, their identity crisis, and their different experience of religion. Karima Sahla: “When mothers themselves engage in conversation with each other, we can break this taboo easier. But it is crucial not to be too direct. When the opening states that we would like to talk to you about radicalisation and how to prevent this for your kids, the mothers will probably not show up”.

To break the ice, a total of seven sessions begin with readings by actress Anita Polman. She plays a mother who sees her daughter change slowly, from a studious pupil into an introvert person. The mother sees the daughter detach more from the family. She is wearing a niqab and black gloves. The mother does not know who to turn to or how to speak with her daughter. She trusts in Allah. But then, the daughter leaves for the caliphate. Sahla: “We insist constantly that mothers enter the conversation with their children. That is not always easy. If a child glorified the IS atrocities, as simple reprimanded is not enough. Mothers must figure out why their child reacts like it does. ”

The Support Centre started in April with an educational program that teaches mothers to actively engage their children in conversations on a topic as radicalization. They also learn where to go to for help if they have suspicions of radicalization. The goal is to give the mothers more knowledge and insight into the world of young people to make them more aware and resilient.

In recent months, some 150 mothers from The Hague participated in the programme. Oumnia Works is intended not only to prevent the jihad. Equally important is that alienation process is slowed down and it will prevent more and more Muslim youth to be excluded by society. A risk especially for young adult offenders in the Muslim community, who often have a hard time returning home after a conviction of (even small) crime. Shame and fear of being ostracized by community and family increases the attractiveness of radicalisation.

This project is part of a broader approach to radicalization of the municipality of The Hague. It creates a lot of interest home and abroad. The approach combines tough measures through criminal law, with softer measures, which are mainly focused on the recognition and prevention of radicalization. Since 2013 sixty people from The Hague travelled to Syria or Iraq, or stopped just before they could depart. That outflow is decreasing; from September to March last year, there are only five people departing.