Women in Prison: The Bangkok Rules and Beyond

Home / Book / Women in Prison: The Bangkok Rules and Beyond 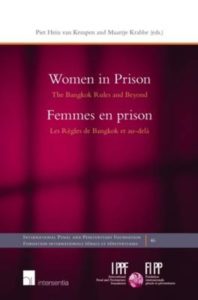 Women are a minority in prison. Currently 6.8% of the world prison population is female, but this number is rapidly growing. Due to the relatively low number of female inmates, prison policies have traditionally developed in response to the behavior of men. However, women in prison have different needs. For example, needs related to: pregnancy, breastfeeding, raising children, hygiene, health and prison security. In order to respond to these specific needs, the UN General Assembly adopted the Bangkok Rules (2010). The Bangkok Rules have three focal points. Apart from responding to the specific needs of women in prison, the rules also focus on the protection of children and the prevention of (sexual) abuse. In addition, the Bangkok Rules promote non-custodial sentences for convicted females.

In 2014, the IPPF (International Penal and Penitentiary Foundation) initiated a global research project on women in prison. Seven authorities in the field of women in prison were asked to write an article on the topic. Furthermore, representatives from 23 countries were asked to fill out a questionnaire on women in prison. Questionnaires were sent to the following countries: Argentina, Australia, Austria, Brazil, England and Wales, Finland, France, Germany, Greece, Ireland, Italy, the Netherlands, New Zealand, Poland, Portugal, Russia, South Africa, Spain, Switzerland, Taiwan, Thailand, Turkey and the United States of America. The responding states were asked to report on the situation in their country considering the following topics: (a) the international legal framework applicable to women in prison, (b) statistics relevant to women in prison (c) criminological factors relevant to women in prison and (d) the actual conditions of women in prison. As to the latter, the responding states were asked to describe whether these conditions are in accordance with the Bangkok Rules. Both the seven thematic articles and the 23 national reports were published in Van Kempen P.H.P.H.M.C. & Krabbe, M.J.M. (eds.), Women in prison: the Bangkok Rules and beyond, Antwerpen: Intersentia, 2017. The introductory chapter to this book presents an overview of the topic of women in prison, referring to the seven thematic articles, the 23 national reports and to supplementary studies on women in prison. The chapter is available for free, right here.

A brief overview of this chapter – focusing on the questionnaire topics and the research results pertaining to Europe – is presented below.

Different categories of international rules are applicable to women in prison: general human rights treaties (such as the European Convention on Human Rights), specific human rights treaties (on torture, war, children, women and work) and international instruments relevant to prisoners (Mandela Rules, European Prison Rules, Bangkok Rules). Most of the respondent states have ratified and/or implemented this international framework. However, not all of these rules are applied in practice, as a fair number of responding states indicates.

As to the causes of criminal behavior of women, various studies demonstrate that women’s pathways to prison can be identified by several shared features, such as: a history of child abuse, sexual abuse, domestic violence, poverty, low level of education, minimum employment histories compared to male prisoners, mothering and responsibilities for others, mental health problems and addiction. Most crimes that women are convicted for, also in Europe, are economic in nature. The highest rates result from drugs-related crimes, but theft and embezzlement also have a high occurrence. In general – but there are several exceptions in Europe – women are less likely to be convicted to a prison sentence than men, and if they are convicted sentences are short.

The actual conditions of women in prison

References relevant to the numbers and facts mentioned in the above summary can be found in: