Why punish? An Introduction to the Philosophy of Punishment

Home / Book / Why punish? An Introduction to the Philosophy of Punishment 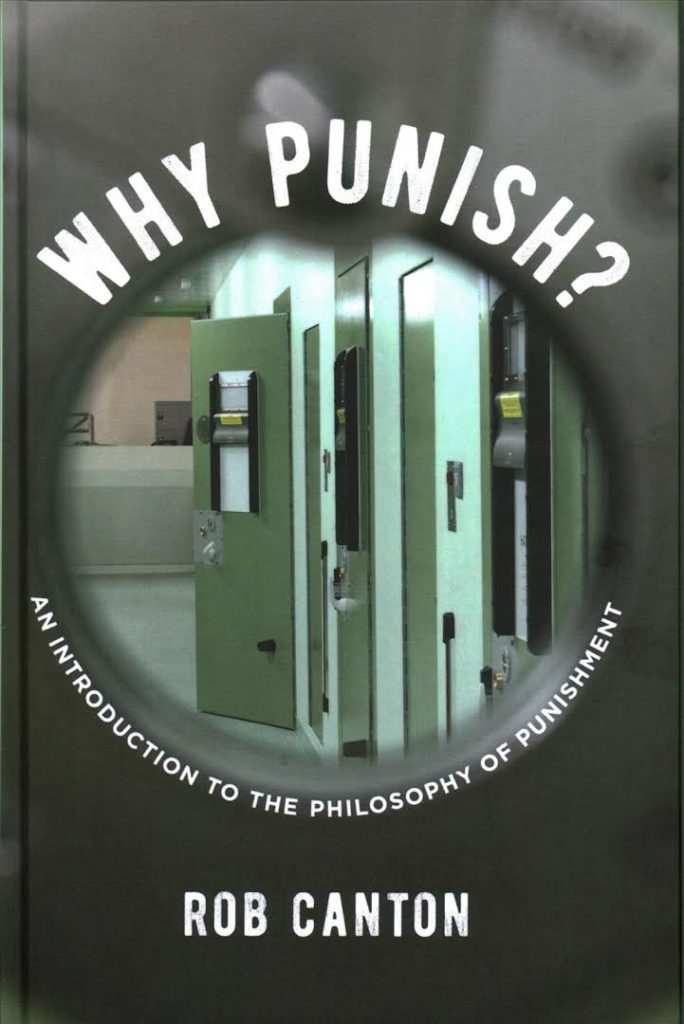 This article is written by Rob Canton.

Why punish? is an attempt to show the value of combining the insights of social sciences with those of philosophy in trying to understand punishment. Subtitled An Introduction to the Philosophy of Punishment, the book takes no particular philosophical position but is guided by a definition from the Harvard philosopher, Michael Sandel:

The book begins by distinguishing three ways of approaching the question ‘why punish?’. The first of these enquires into the reasons why responding to wrongdoing so often involves ‘hard treatment’ – repaying the wrong with some sort of pain or hardship to the wrongdoer. This retributive response is recognised always and everywhere, but why is it that people do this? Perhaps we punish in order to defend and uphold the social order. By denouncing the crime, we affirm the values that bind people into a community. Or does punishment expose some of our psychological needs and insecurities? An early chapter discusses this and tries to understand what punishment means to us, how we learn about it and how ideas of fitting retribution are expressed and reproduced in religion and in stories.

The second way of approaching the question is referred to as a political inquiry. It asks about the purposes that people set for punishment (remembering that different people may have different purposes in mind). These stated objectives may not be the same as the true reasons: for example, many politicians and scholars use the instrumental language of reason and effectiveness, but the inquiry into the origins and meanings of punishment suggests that punitive reactions are as often emotional and expressive. David Garland refers to the tragedy of punishment, tragic because it is politically inescapable, but can achieve almost none of the purposes set for it.

The third inquiry is an ethical one. What is the moral justification of punishment? Most attempts at justification amount to one or other of these arguments:

But the book goes on to challenge all these accounts. The mechanisms that are supposed to control crime, deterrence, rehabilitation and incapacitation, do not make nearly as strong a contribution to crime reduction as is commonly assumed and indeed some kinds of punishment (prison especially) may well lead to more offending rather than less. A chapter on restorative justice explores the question whether punishment is the best way to honour the experience of victims.

Another chapter considers the limitations and dangers of punishment. Punishment often makes things worse and a reliance on the apparatus of criminal justice and enforcement often fails to reduce the incidence of what Nils Christie called ‘deplorable acts’. Crime has complex social origins and it is unreasonable to think that criminalisation, arrest and punishment can resolve them. The belief that it can has been the origin of a great deal of flawed policy leading to disappointment, anger, and frustration. Criminal justice is constantly at risk of undermining other mechanisms, notably trust, a sense of moral responsibility, mutual respect, dignity and social justice, that have a sounder ethical foundation and do much more than the institutions and practices of punishment to reduce crime and bad behaviour. It is argued here that it is social justice, not criminal justice, that is the answer to crime problems.

The concluding chapter proposes that if we are to use philosophy to make things better (as Sandel proposes), we must first decide what ‘better’ would be like, what would be improvement. Some recommendations for policy makers, for sentencers and for practitioners are set out. The focus here is both on ethical enhancement and on effectiveness, although it is the ethical questions that are in the foreground of the discussion. The need to improve the ways in which punishment is administered is more pressing than the usual search for ‘the justification of punishment’. Secondly, we must inquire into the political feasibility of trying to bring about these changes, a formidable challenge, given the emotions associated with punishment and its place in many cultures.

Many books in the philosophy of punishment are remote and abstract. This book attempts to ground discussion in some real world dilemmas of policy and of sentencing practice. Case studies, many taken from the author’s own experiences when working as a probation officer many years ago, are used to try to draw out some of the practical implications of the theoretical positions elaborated in the book.

The complex answers to the enduring questions about punishment vary across time and place, and are directly linked to people’s personal, cultural, social, religious and ethical commitments and even to their sense of identity. Why Punish? challenges criminology and criminal justice students as well as policy makers, judges, magistrates and criminal justice practitioners to think more critically about the role of punishment and the moral principles that underpin it. Bridging abstract theory with the realities of practice, the book asks what better punishment would look like and how it can be achieved.

Please click on the link, if you are interested in purchasing Why Punish? An introduction to the philosophy of punishment.