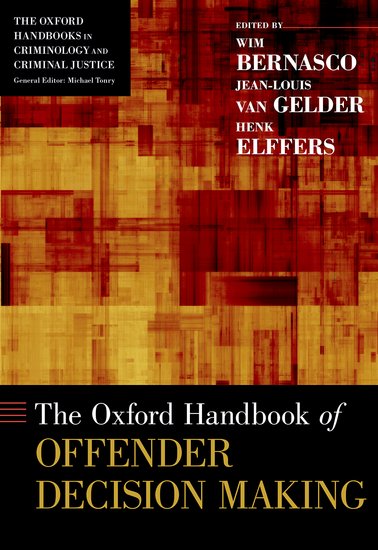 The Oxford Handbook of Offender Decision Making is a book written by researchers Wim Bernasco, Jean-Louis van Gelder and Henk Elffers. It provides reviews of the main paradigms in offender decision-making, such as rational choice theory and dual-process theory.

The book does not only include information about the decision to get involved in criminal behaviour, but also about the choice of victims, locations and methods, time as well as large variety crimes including homicide, robbery, domestic violence, burglary, street crime, sexual crimes, and cybercrime. Lastly, it provides in-depth treatments of the major methods used to study offender decision-making, including experiments, observation studies, surveys, offender interviews and simulations. Comprehensive and authoritative, the Handbook will quickly become the primary source of theoretical, methodological, and empirical knowledge about decision-making as it relates to criminal behavior.

If you would like to have more information on The Oxford Handbook of Offender Decision Making, please click on the link.