Enforcement of Offender Supervision in Europe 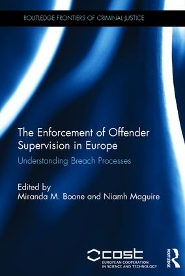 The book ‘Enforcement of Offender Supervision’  by Niamh MaGuire and Miranda Boone provides a comparative analysis of the process of breach across ten different European jurisdictions. The book focused on the breach processes that follow non-compliance with a community sanction or measure and non-compliance with conditional early release from prison. It is informed by the research activities of the COST Action IS1106 on Offender Supervision in Europe, particularly the Action’s work on developing new comparative methodologies to examine the process of decision-making involved in the breaching of offenders for non-compliance. CEP spoke to the authors about their research and findings.

The volume consists of ten country chapters and six thematic chapters. The ten country chapters include: Belgium, England and Wales, Germany, Greece, Ireland, Italy, Lithuania, The Netherlands, Spain and Sweden. The key themes and emerging concerns that we examined in the thematic chapters include: the roles and responsibilities of the different actors involved in the breach process, the degree and nature of discretion exercised by decision-makers and legitimacy, due process and procedural requirements both on a European level as on a cross country level.

How was the information for the book gathered?

The book consists of two parts. Part A is the result of our comparative analyses and conclusions. This part is rooted in the findings of ten country reports which are published in part B. These country reports are based on exhaustive reviews of the literature available in each jurisdiction as well as the results of an empirical pilot study using vignettes (short case descriptions) that were presented to and discussed with practitioners all over Europe. The analysis in our thematic chapters, although based upon country chapters, goes beyond them. During the many meetings we had in person or by Skype or email we often checked and double-checked with the authors of the country chapters that our comparative analysis made sense and did not misrepresent or misinterpret a particular system. The thematic chapters attempt to go beyond descriptions and classifications towards providing some level of explanation and interpretation.

What are the most important conclusions?

We can talk about three important conclusions here. An important finding that is reproduced in almost all the thematic chapters, is that the layperson, someone who technically stands outside the penal field, is an important decision-maker in breach processes in almost all jurisdictions. In most cases, his or her position often goes unrecognised by laws, regulations and guidelines governing the enforcement of non-compliance.

Another important finding is that early stage actors exercise more significant decision-making power than previously thought. This in turn raises the issue of the need to ensure that appropriate due process protections are in place during the early stages of the process of breach to ensure fairness, but without reducing their discretion so much that they cannot perform their role of supporting the offender to complete the supervisory order successfully.

A third important finding is that breach processes in the different countries we studied seemed to embody one of two different approaches towards enforcement. The majority adopted a rehabilitative approach, whereby a degree of non-compliance is tolerated and even expected as part of the journey of a person desistance and reintegration. The other main approach towards enforcement relied more upon deterrent approach with more emphasise on preventing risk and ensuring formal rather than substantive compliance.

What challenges did you face in the process of making the book?

Despite our hard efforts, the major challenge was of course to come to comparative analyses that really added to analyses on a national level. One of the endeavors and objectives of doing comparative research is to understand each other and develop a common language. This objective seems to be even more difficult to realise in the field of sentencing implementation. Even within the one language, many terms have several equivalents, which can be used as alternatives, but sometimes also have a slightly different meaning, for example probation or rehabilitation. It can take a while before these misunderstandings come to the surface. And even if one understands the different meanings of comparative concepts, it does not make immediately clear what the consequences of these differences are for the system as a whole.

During the course of our work on breach processes we had many misunderstandings. For this reason alone (other aspects of comparative research will be discussed later in the methodological section) good cooperation is an absolute condition for an international research group to do comparative work. One has to cultivate the willingness to listen carefully to each other and to ask endless questions to avoid misunderstandings. Another challenge of this research was comparing statistics. It would be an interesting outcome if we could make a clear statistical link between characteristics of different systems and rates of revocation and recall. The assumption that rates of revocation and recall were rising in different jurisdiction was, after all, one of the starting points of our research. We, however, faced several problems with respect to collecting and comparing rates of revocation, problems we describe extensively in the introduction of our book. Therefore the statistics produced in this volume only have very restricted value. At most, they show interesting fluctuations or stabilities in the countries they derive from. The explanations mentioned for these tendencies reflect universal correlations but do at least show the accuracy of the thesis that differences in compliance rates are influenced by many factors other than good or bad behavior alone.

What surprised you the most during the process of making the book?

What surprised us most was that despite the legal, cultural, social and political differences between our countries and despite how differently our countries respond to almost identical enforcement issues, the comparative themes we chose to explore-particularly due process, power, professionalism and legitimacy were equally relevant and important to all jurisdictions.

Please click on the link if you are interesting in purchasing Enforcement of Offender Supervision in Europe.