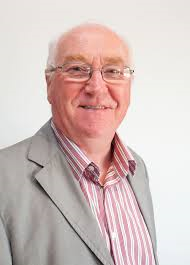 Getting a quick fix on the probation arrangements in another European country can be a tortuous business. You could read the “Probation In Europe” chapter in the CEP handbook.  But most span over 50 pages of text.  You could look at the SPACE II Report.   But you’d have to wade through 94 pages of tables and notes to get the data on just one country.  The database of Alternative Sentences and Measures gives you an account of the available probation-type sentences, but it’s essentially a lawyers’ document, and the World Prison Brief is a reliable snapshot, but only of prison populations.  You can find out about Community Service, or electronic monitoring, but nowhere is there an easily-accessible general probation overview all in one place.

Enter System Maps. We stumbled upon System Maps in the 2010-2012 DOMICE Project.  We quickly realised that we could not “make sense” of one aspect of probation without understanding it within its host correctional system.  So we drew little “maps” – schematic diagrams which made it easier to see probation work in the wider context of each correctional system.  Colleagues in other countries seemed to enjoy helping to build the maps. Imagery crosses language barriers better than text.

But the DOMICE they were only prototypes. How helpful it would be if the data from all the sources above, and more, could be compressed into a couple of interactive screens?

At the end of 2015 the CEP commissioned us (Tony Grapes and Leo Tigges) to upgrade the whole suite of System Maps. The idea was – and still is – to position a visual map alongside the “Probation In Europe” chapter, so that users have the option of an in-depth read or a “quick fix”.  This would surely make the CEP the first port of call for anyone wanting to learn about probation in Europe.   It would also support practitioners and managers who need to understand the arrangements in other countries in order to organise the transfer of probation cases under the Framework Agreements.

We started the process at the end of 2015. It took some time to agree the underlying template upon which each map is based.  Even now that template is evolving as we learn more about what works best.  The source material isn’t as easy to work with as one might imagine.  Most of it is written in English by colleagues translating from their own language. It’s remarkable how many different translations people use for essentially the same idea or “product”; whether we should translate these all into some sort of common European probation language, or respect the translations of the different authors is a continuing dilemma.

But it’s also fascinating. Which countries have a fairly sophisticated probation system, but write almost no pre-sentence reports?  Where has the prison population been cut by 50% since 2000?  Where do you earn more than a day off your prison sentence for every day spent pursuing your rehabilitation plan?  Why do some countries view electronic monitoring as a form of imprisonment, while others view it as an alternative to it?  Where is the supervision of offenders in the community an integral part of local social services?

The first tranche of 13 maps is being uploaded now. Some are already there – Greece, Finland, Belgium, Romania, Ireland, Spain.  Take a look.  Generation 1 (DOMICE Project) maps were written in web language, so were difficult to correct or amend.  For Generation 2 we’ve found a way to mimic the pop-ups you get on a web page using PowerPoint.  This is great because it means you can download the maps yourselves for your own use, and we (CEP) can correct and improve them quickly and at negligible cost.

They maps are just 2 screens. The first is a flow chart of the sentence arrangements, colour-coded so that you can see which aspects are the responsibility of the national “probation service” (however probation is configured and whoever it’s run by).  The second screen in a structure chart of how probation is organised.  The screens are peppered with little coloured question-dots, from which additional information pops-up as you place your mouse over them – pink for law and regulation, green for metrics and money, yellow for history and other information. 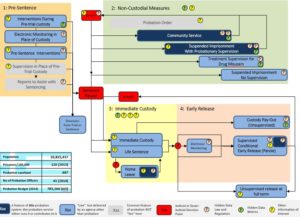 System Maps are great fun to interrogate, and each contains as much of the information from the sources mentioned above as we can squash into a dot!  Ultimately, we imagine colleagues using them, spotting errors or places where updating is need and e-mailing us, so that they continue to evolve in detail and accuracy.  Together we can create our own Probation-o-paedia.