Niall McEvoy has been with the Probation Board for Northern Ireland (PBNI) for over 20 years, working as a Probation Officer and an Area Manager, mainly based in Newry, County Down. Now an Assistant Director responsible for the probation teams which work in the rural areas of Northern Ireland he discusses the use of the Enhanced Combination Order (ECO) as an alternative to shorter custodial sentences of 12 months or less.

Niall is the first to admit that probation is ‘not an easy option’ but provides the ability for people to turn their life around and protect the community. During his time in PBNI he has seen both success stories and some individuals who have failed to engage. He states that most of the caseload for a probation officer is the supervision of people who have offended released on licence following a custodial sentence. If an individual is not sentenced to a period of immediate custody, the other options will be community service, probation or an ECO.

A pilot scheme, the ECO began initially in October 2015 at courts in Newtownards and Armagh & South Down, before expanding into the North West of Northern Ireland in 2018. “They came into being because the judiciary wanted to look at a community alternative to custodial sentences of 12 months or less, whereby the person has to address their offending in the community,” Niall explains. Custody is preferable for many people who have offended because for them it can be challenging to address the root of their offending. “First and foremost we need to address the reasons why people get into trouble and how they can make better decisions but also getting them to look at the impact of their offending on the victims and on their communities.” One major tool with ECOs, according to Niall, is the early intervention of psychologists to address issues or traumas which have proved to be “very effective in addressing challenging behaviours and decisions”. A major part of these orders is that they also include up to 100 hours of unpaid work as a way of giving back to the community.

“We’ve got very good working relationships with the local Council, which has been particularly useful since the pandemic, because they were able to open up spaces working outdoors,” Niall explains. Upon the start of 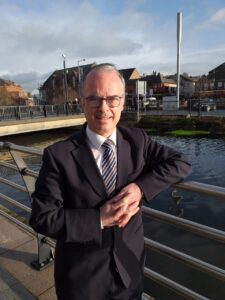 the pandemic, he admits that there was a concern that people would disengage with probation as face to face communication was reduced, however, this proved not to be the case. “We actually found that many of those on probation actually benefited from the continuity and support offered in what was an isolating time for all,” says Niall. Although the work ordered as part of an ECO is to benefit the community, Niall commented that it could be tailored in order to help individuals gain employability skills. Through work with NIACRO (Northern Ireland Association for the Care and Resettlement of Offenders), probation are able to help people who offend get back into the job market through training courses and programmes. After being assessed by psychologists, probation are able to identify ways in which issues can be addressed to appropriately manage offending. Niall states: “We would be helping people with drug and alcohol issues, which has worsened over the last two years. Our probation officers are very tuned in and signpost our Service Users to our relevant partners. “We also have a partnership with children’s charity Barnardos who offer a parenting programme for individuals who need help with the parenting of their children, because obviously we want to break the cycle and not have it pass onto another generation.”

Despite all of these options, probation is not an easy solution but provides the ability for people to turn their life around and protect the community, Niall explains. “It is difficult as many have been in and out of prison, but we’ve dealt with people who may be at an earlier part of their criminal offending career who have diverted from that and moved in another direction. “Just a couple of months ago, I was on my way up to Belfast, I saw a man who recognised me and I him, although in my advancing years I am not good with names. He was telling me how he had turned his life around and had his own firm.” One trend that is apparent for these success stories, according to Niall, is that they have strong family and community supports. He continues: “Ultimately we are working to change people’s lives for safer communities and the ECO is enabling us to do that”.