Anyone interested in prisons ought to know John Howard (1726-1790). His countless visits to correctional institutions and places of confinement all over Europe, and his books describing, with exacting precision, what he found were an eye-opener for eighteenth-century society. He set people thinking about what prisons were like and what they should (or should not) be. Although he was a man of rather limited personal ambition and limited skill in terms of policymaking, his activities and publications had a great impact, which often ended up placing him in the foreground as a major philanthropist and prison reformer.

John Howard’s undertaking in the late eighteenth century was to enter prisons in order to determine for himself what they looked like and how they functioned. It is clear from his writings that he was mainly concerned with the organisation of prison life and how prisoners were treated. His flood of prison visits and his European tours were prompted by his appointment as High Sheriff of Bedfordshire in 1773. As High Sheriff he made an official visit to the county town gaol. Although many of the things he witnessed there struck him with revulsion, he was especially shocked by the fact that the jail keepers did not receive an official salary from the (local) government and were dependent on what they got or could take from the prisoners. However, it is doubtful whether that experience directly and solely caused Howard to spend the rest of his life visiting prisons and writing up his visits. The cause of his wanderlust may be found more in his character and the course of his life than in some particular question in his mind that he needed to resolve (West, 2011).

John Howard inspired me to follow his footsteps and visit 15 prisons in six countries (England and Wales, Norway, The Netherlands, France, Italy and Azerbaijan) between May 2013 and November 2014 (Vander Beken, 2016). My study had a somewhat different focus than Howard’s. Rather than starting from the question of what prisons are, what they look like or how they work, the basic premise has been to investigate what prisons in contemporary Europe are for, and what functions they have in and for our society. Although my study was not set up to focus on foreign national prisoners, the issue popped up in several country studies and in my conclusions.

In Howard’s State of the Prison only one reference can be found to foreign national prisoners (following his visits to detention facilities holding prisoners of war): “I grant there is a material difference in the circumstances of foreign and domestic prisoners, but there is none in their nature: debtors and felons, as well as hostile foreigners are men, and by men they ought to be treated as men.” (Howard, 1776: 23)

In my study, I especially noted findings about foreign national offenders on my visits to prisons in England and Wales and Norway.

Without any doubt, if John Howard was to visit English prisons today, he would have been fascinated by the explicit risk and tax payers’ discourse in discussions about prisons in that country. And by the specific interest in foreign national offenders with even separate prisons for that group of offenders. It has lead me to the following thoughts: ”The primary stress seems to be laid upon the cost (and reducing the cost) to society of incarceration. Nevertheless, prisons also have to protect the public from the risk of criminality and dangerous individuals. Unless they are foreigners, it seems. Many of these are kept in prisons of their own under a policy of deporting them as soon as legally possible so that they do not encumber the budget. British policy evidently finds it necessary to lock people up rather a lot. It is also a policy that is quite taken with the recurring question, “Can it be done more cheaply?”. (Vander Beken, 2016: 46)

Norway, a country that Howard has never visited but that would certainly on his list as if he were to do his trips today, is one of the countries with an excellent prison reputation both in terms of detention quality and prisoners rate. In this country too, foreign national offenders are in my reports: “Like the rest of Scandinavia, Norway in Howard’s time was not coping with an influx of foreigners; rather, it was experiencing emigration. […] I am told that this is a deportation policy with teeth, and that a great many convicts are actually booted out of the country after a last stop at the Aliens Holding Centre at Trandum, near Oslo Airport. […] Foreigners are provided with equivalent, but not necessarily identical, facilities. For instance, while Norwegian inmates have a legal entitlement to pursue further education in prison just as they could in the outside world, that right does not extend to foreigners, who are only given access to basic-level courses. Medical services cannot be faulted and are provided to everyone in prison. They are comparable to what would be on offer in Norwegian society at large. […] The vigorous deportation policy reveals a determination to keep Norway Norwegian, indeed to keep Norway above all for the Norwegians. But how can that desire sit with the reality of prisons receiving more and more foreigners? And what kind of reintegration into society should be invested in by the country’s prisons?” (Vander Beken, 2016: 53, 65, 70 and 78)

In my conclusion, reflections on foreign national prisoners are central: “Some countries are getting tough about the physical exclusion of some foreign convicts, by declaring them persona non grata and expelling them. The time is long gone that the problems of incarceration and criminality could be solved by deporting the undesirables over the seas, but many countries are still wrestling with a better solution to replace it. What can be done with transients whose only connection to the country in which they are imprisoned is the crime they committed while passing through? What kind of inclusion can be on offer for them, and how and where should this inclusion be brought about? For me, these are the key challenges that will face the prisons of tomorrow which will want to do more than incarcerate people. And my travels have convinced me that this is the very matter that is causing today’s European prisons the most headaches.” (Vander Beken, 2016: 216)

Howard, J. (1777). The State of the prisons in England and Wales with preliminary observations and an account of some foreign prisons. Warrington: William Eyres.

Vander Beken, T. (2016). The role of prison in Europe. Travelling in the footsteps of John Howard. Basingstoke: Palgrave Macmillan. 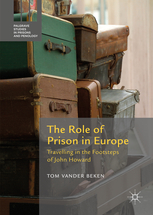