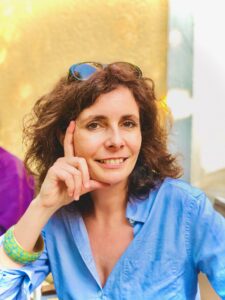 Today I am joining the House of justice, which is where I do my duty to follow the people living in my sector, in order to be as close as possible to them and to be in touch with the partnership necessary for our support. I greet the other workers and begin to receive the people summoned.

First, this man tells me about an assault he was the victim of. He got out of prison two years ago, he has difficulty recovering, his relationship has not withstood the distance, he has difficulty regaining his self-confidence, he makes up for it with alcohol, but he realizes this and he has undertaken a therapeutic follow-up, at first obliged to do so, and then he wanted to continue. When he was attacked, he decided not to retaliate given his criminal past, but he still lodged a complaint, there are still 2 months of follow-up. I feel he is still morally fragile but also more reflective, I am confident in his process of getting out of delinquency.

I write an incident report for a lady who doesn’t keep her appointments and who has gone abroad without informing us, during the interviews she sees “my soul, she knows it’s beautiful”. She is here for a story about a dog bought with a stolen cheque (a given cheque according to her), it’s a minor offence but the tree hides the forest, I know from having followed her before in a prison that her personal story is terrible, that she was sexually abused and mistreated by her father when she was a child. Know that women who go through prison have broken life stories, they have difficulty getting back on their feet. I don’t want to work with women prisoners anymore, not since I became a mother, it’s too difficult.

I like working with young adults because they are spontaneous, their minds are still developing, and you can see them evolve quickly: receive this young man who, after two years of follow-up, is on the road to desistance thanks to his partner and his daughter, and thanks to the time that accompanies the multiple measures he is subject to, I have seen him growing up, working, setting himself up for failure, being re-incarcerated, becoming a father, taking responsibility. We believed in it together despite the difficulties, he was able to show his parents his evolution, and this year he is the one who is inviting them to go on holiday to thank them.

I receive this probationer who has been convicted again for driving under the influence of alcohol, whereas the last follow-up had ended a year ago. I don’t like to see people coming back, I have the impression of having missed something. So, we start again, we try to settle down and see what has happened in a year: not too much change, he still has the impression of being subjected to the choices of his (ex) partner, this time I talk to him straight away about therapeutic follow-up, he agrees, he says that this conviction is a blessing in disguise. He wants to get his driving license back but doesn’t know how to do it, we look at the prefecture’s website together and a place is available in 2 months, we book it, he’s happy, he “hasn’t come for nothing”.

Finally, this 60-year-old man who presents himself for having threatened with a weapon and in a state of inebriation, his neighbor who was applauding the carers during the confinement, “can you imagine the noise for 2 minutes, do you realize?” no, not really… I thanked them, the carers, the public hospital that we were discovering without means… We’ll have to work on frustration and think about moving, won’t we? Because in the city we’re often disturbed. “I’d like a house in the countryside”, I add, “but watch out for the rooster!”.

It also exchanges with colleagues over coffee, a service meeting with partners we invite; dramatic events that are reflected in memos that accumulate in the mail, volunteers that we train to help us in our mission of rehabilitation, unions that try to coordinate to defend the public service, associations that encroach on our missions, magistrates who don’t see the trap and who, despite everything, trust us, believe in the capacity for change and allow us to give meaning to the sentence and to individualize it, trainees to whom we have passed on our values… It’s not just in one day, but sometimes I feel like I’ve done three in one!

I don’t necessarily remember their names once the people are no longer being followed, but I do remember their lives, the absent fathers, the overly present mothers, the children we don’t hear from, the ones we spoil to make up for a lost time, the spouse who leaves us, the wife who dies, the one who comes back in spite of the ban, the agencies that don’t give you any more assignments because you’re on an electronic bracelet, the bosses who give you a second chance as well…

The days follow one another and are not the same. I meet new people, I continue with others, some are annoying, but most are endearing, and they all need to talk. I listen, I set a framework, I maintain it despite everything, I try to plant a seed, to think with them, always with the objective that with time people become responsible, pay their debt, and can choose their life so that it is the most satisfying for them and for others and especially far from the courts, and from us too…