Council teams with Probation Board for New Graffiti Removal Service 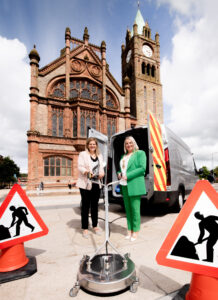 Derry City & Strabane District Council has joined with the Probation Board for Northern Ireland to offer a new service for the removal of non-contentious graffiti across the city.

The new service will see people undertaking community service orders employed to remove non-contentious graffiti from walls, buildings or wherever else it may appear.

Launching the new service at the Guildhall yesterday afternoon, the Mayor of Derry City & Strabane District Council Cllr Sandra Duffy, said that the Council was extremely aware of the negative impact which graffiti has across the city.

“Graffiti is an issue in almost every community, defacing surfaces on public buildings, private homes, children’s playgrounds, bus shelters etc. The negative impact of graffiti should not be underestimated. Whole neighbourhoods feel the demoralising effect, as their area is daubed in unsightly graffiti and clean-up is costly.

“Graffiti is also a prevalent and environmental problem, linked to anti-social behaviour in many areas.  The Council has finite resources to deal with the scale of non-offensive graffiti throughout the city and we see this partnership with the Probation service as a mechanism to addressing some of the non-contentious graffiti in the city.

“Derry City & Strabane District Council will continue to remove contentious, offensive, sectarian and racist graffiti with the permission of the property owner and where the health and safety of our staff is not compromised.  This new scheme is designed to allow us to respond to requests to remove non-contentious graffiti more quickly and efficiently.”

Requests to have graffiti removed from private property will be handled by the Council’s Environmental Team.  Once the nature of the graffiti is assessed, then non-contentious cases are referred to the dedicated Probation Community Service team to remove.

Amanda Stewart, Chief Executive of Probation, said: “Keeping communities safer is only possible through strengthening our partnerships with other partner organisations and working alongside communities to respond to concerns and issues that arise in local areas.   This new service working in partnership with Derry City & Strabane District Council is delivering a local solution to issues and concerns around graffiti and is central to building confidence in the work of Probation.  This project reinforces the commitment of Probation to work with partners and the local community to continue to improve community safety and I am very proud of the service we are launching today and what it represents.”

Assistant Director of Probation Niall McEvoy also said at the launch: “The service will give an opportunity to people who have offended to make good on the harm they have caused to local communities as well as improving the environment for the citizens of the Derry City & Strabane District. We will seek feedback from the local community on the operation of the Graffiti removal scheme.  A similar service in Belfast is working well and, if on evaluation the project here is successful, we will engage with other councils to roll out graffiti removal services across Northern Ireland if that is something local councils and communities ‎would find useful.”