CEP presents the five winners of the CEP Awards

Home / CEP presents the five winners of the CEP Awards

During the General Assembly and Directors General Conference, CEP presented the five CEP Awards to its winners. With the awards CEP would like to celebrate outstanding contributions to probation within Europe. We were glad to receive all the impressive submissions of which the following winners are chosen. Congratulations! 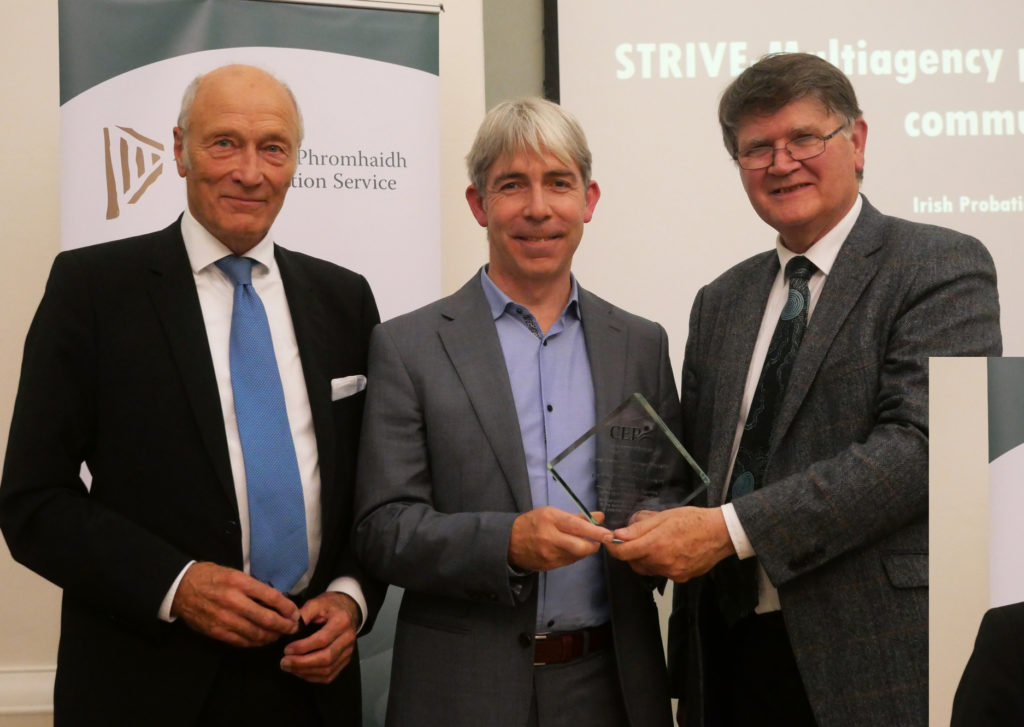 The winner of the CEP Public Protection Award is the project STRIVE by the Irish Probation Service.

STRIVE is a multi-agency project based in a community in North Dublin with a population of approximately 6,000 people, an area classed as ‘disadvantaged’ with problems of anti-social behaviour and drug related crime.

The project, which has been operational since 2015, typically targets 20 high-risk problematic offenders who are identified as causing the most harm in the community using a coordinated approach of various local stakeholders. These include local justice agencies (the Probation Service, Irish Prison Service, An Garda Síochána), governmental (Dublin City Council, Department of Social Protection, Health Service Executive) and NGOs (Job Centre, local Drugs Task Force).

The overall aim of STRIVE is to reduce the offending of these individuals through multi-agency pathway treatment programmes, thus delivering an effective and sustained improvement in the quality of life for themselves, but most importantly for local residents and for all citizens who frequent the area. 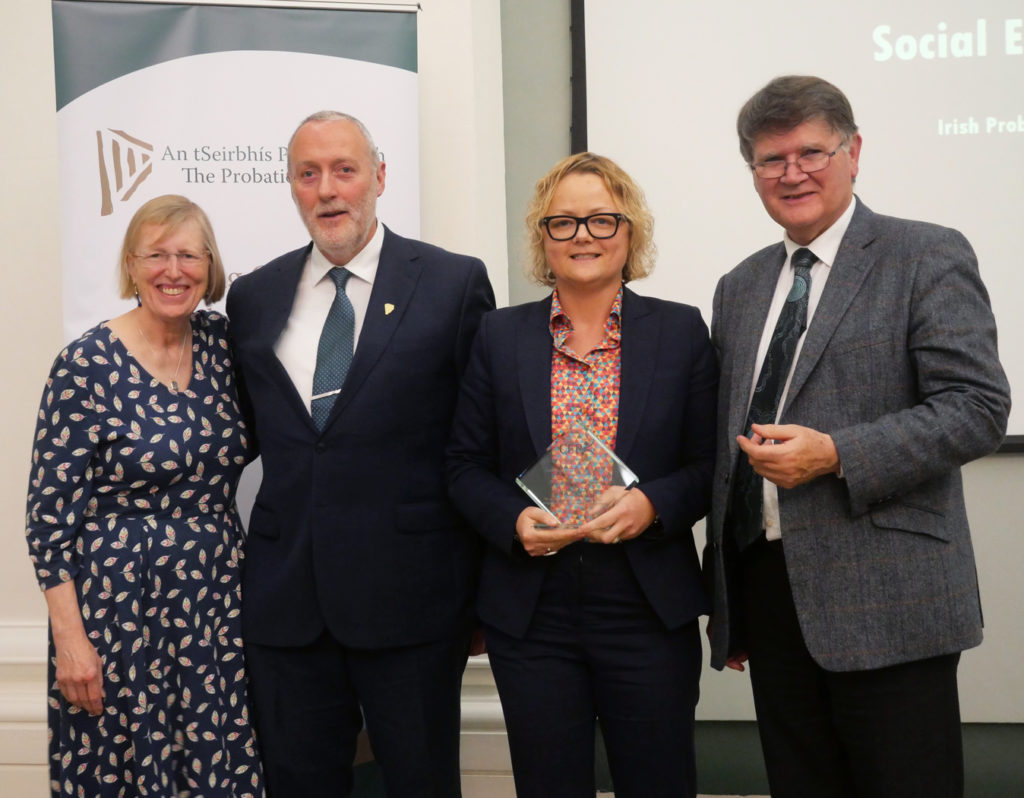 The winner of the CEP Social Inclusion Award is the project Social Enterprise by the Irish Probation Service.

In 2017, the Department of Justice and Equality launched, ‘A New Way Forward – Social Enterprise strategy 2017 -2019’ in partnership with the Probation Service. This initiative aims to engage multiple stakeholders and support them to work together to develop social enterprises in Ireland to support the employment of people with convictions. It is committed to trialing new ways of working, changing systems to work in line with good practice and encouraging entrepreneurship and innovation.

SEs play a key role in an individuals’ journey to long term, well paid, sustainable employment. Coupled with skills, training and the right attitude to work, a recent employer reference plays a significant role in increasing opportunities to access the mainstream labour market for people with a history of offending behavior. By creating a much needed buffer between prison, or engagement in a community based Probation project, and the mainstream labour market, they create a pathway out of the penal system, empowering and supporting full community reintegration. With the unemployment rate in Ireland at its lowest in over a decade, the rollout of this initiative works toward ensuring that no one is left behind because of their criminal record. 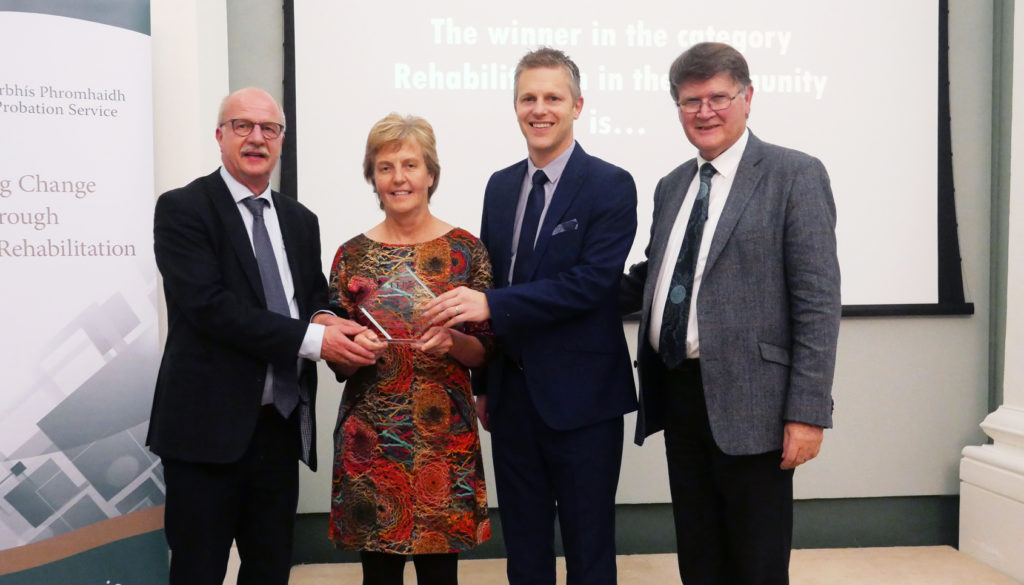 The winner of the CEP Rehabilitation in the Community Award is the project ‘Enhanced Combination Order’ by the Probation Board for Northern Ireland.

Research shows that short-term prison sentences are less effective in addressing offending behaviours than community-based disposals and that more than 50% of offenders sentenced to a short prison term will re-offend. The Lord Chief Justice in NI therefore requested that the Probation Board for Northern Ireland (PBNI), develop a demanding community sentence as an alternative to the high number (88% at May 2015) of prison sentences lasting less than 12 months.

In October 2015 PBNI commenced the introduction of the Enhanced Combination Order (ECO) as an alternative to short prison sentences. ECOs offer Judges a community option in a more intensive format.
ECOs focus on restorative practice, desistance and victims, with service users also required to complete unpaid work within their local communities.
Those with mental health issues are assessed by PBNI psychologists, with a treatment plan or referral to an appropriate health provider then forming part of the intervention. Where appropriate parenting/family support work and accredited programmes are also part of the order.
Probation work in partnership with a range of community and voluntary organisations to deliver ECOs including Barnardos, Restorative organisations, and Victims Support NI.
As of March 2019 360 people have been made subject to an ECO. That is 360 people who would have otherwise been sentenced to a period in prison. 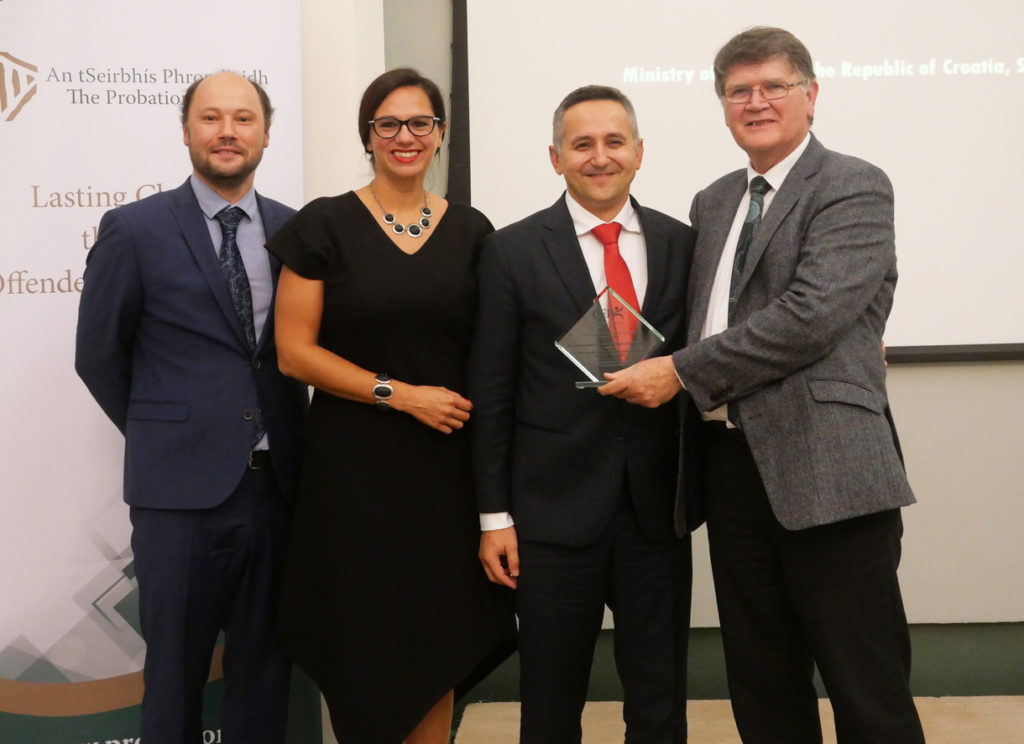 The Croatian Probation Service was formally established in 2009 and a team of only 9 civil servants worked intensively on the development of an institutionalized and professional probation system. During 2011 and 2012 twelve local probation offices commenced with their work with sixty newly employed probation officers. 2012 was a year of intensive learning, acquisition of skills and competences in accord with the best European practices. The Service has developed its identity through European projects which were a continuous support in its progress.
In the past three years significant changes have taken place, raising the Croatian probation service to a higher level. We would like to emphasize that in three years the services has grown from paper (Probation Act) to a professional organization.

The identity of the service and its role in the criminal justice system have become recognizable and undeniable. The probation officers participate in national and international events promoting the probation service and presenting their work. The interdepartmental cooperation has been widened, intensified and strengthened. With the aim to protect the community, the probation service cooperates closely with the police force and prison system, primarily through timely exchange of information, as well as through other forms of mutual work. Concerning the reintegration and resocialization of criminal perpetrators, the probation service cooperates with several different governmental and non-governmental organizations which may be of assistance to probationers in overcoming difficulties they may struggle with (mental disorders, various forms of dependencies, violent behavior).
Human resources have been strengthened and two new probation offices have been opened. In the first half of 2018 a new probation office was opened in Gospić and another in Vukovar, alleviating the caseloads of those offices which previously covered their territorial jurisdictions. Now probation services have become more readily available to residents of the Primorje-Gorski Kotar and Vukovar-Srijem Counties and the execution of probation tasks more economic. By the end of 2018, the probation service consists of 106 civil servants, mainly social workers, social pedagogues, psychologists and jurists.
During 2017 the probation service became a constituent of the Directorate for the Prison System and Probation which has made possible a more intensified and qualitative cooperation between the probation and prison staff, common training participation, conduct of innovative pilot projects and easier risk management that their clients bring along.

At the and of 2018 a new Probation Act was passed in alignment with the latest Criminal Act, simplifying longstanding probation practices. The new Probation Act contains recommendations produced within the framework of the Transition Facility Project „Support to further development and strengthening of the Probation Service in Croatia“, in compliance with the best European practices.
The field of activities of the probation service has expanded in such manner that it is now competent for the execution of the security measure of obligatory addiction treatment, psychiatric treatment and psychosocial treatment for violent behavior.

New approaches in the work with probationers have been developed to better address their treatment needs. During 2016 and 2017 programs were developed for perpetrators of gender-based violence (“Možeš i drugačije” – You can do it differently), perpetrators of violence-based crimes (“Korak u promjenu” – Step toward Change) and sexual offenses (“Ogledalo” – Mirror), while probation officers attended training for their implementation.
In 2017 an electronic monitoring pilot project was conducted within the framework of probation supervision for persons in investigative detention and conditionally released offenders, which created preconditions for the permanent introduction of electronic monitoring into the Croatian criminal justice system. Currently the plan is to implement electronic monitoring during the period of 2019 – 2021. 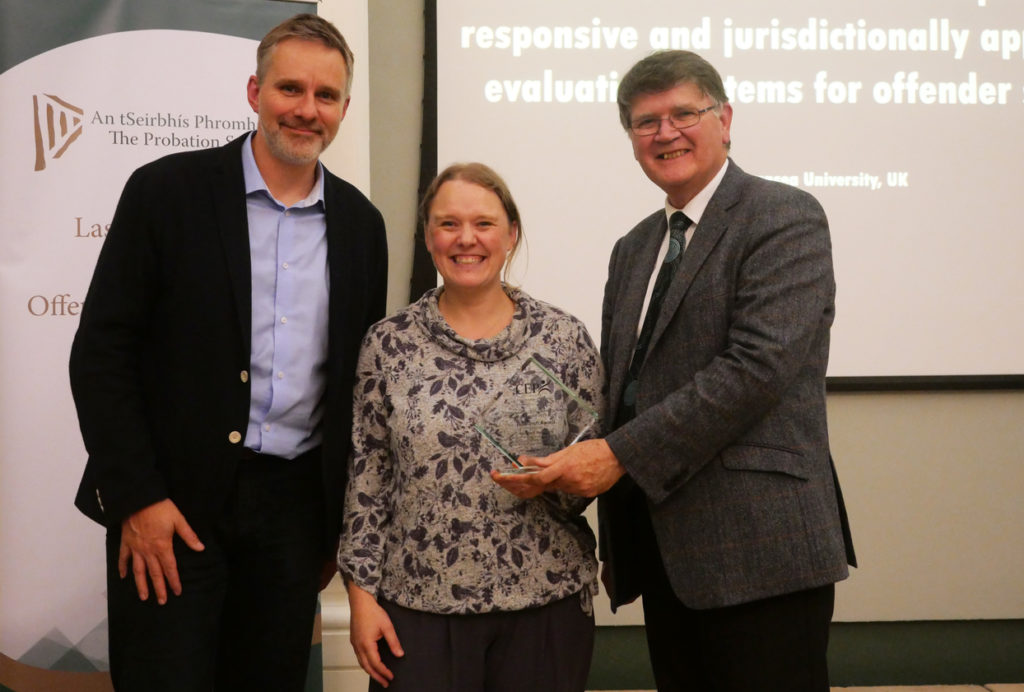 The winner of the CEP Research Award is Dr Bridget Kerr with her research ‘Evaluation on Probation: developing gender-responsive and jurisdictionally appropriate evaluation systems for offender services’

This research project, carried out over the past five years in Wales and Jersey, has used and refined comprehensive evidence-based approaches to service evaluation which cover both the quality of practice and the capacity of organisations to deliver and support effective practice.
The starting point was the Correctional Programs Assessment Inventory (CPAI) developed in Canada by Paul Gendreau, Don Andrews and Yvette Thériault. Dr Kerr was trained to be an accredited CPAI assessor (one of only two in the UK) on a course organised by Swansea University’s criminology department, with a view to testing this approach in contexts other than the Canadian and US correctional services where it had been used up to that time. First, the CPAI itself was tested in a Probation Service women’s project in Wales and in the Jersey Probation and After-Care Service. Both these pilots included direct observation of practice, and interviews with people at all levels of the organisation; in Jersey this included service users and a Magistrate. The resulting report on Jersey is included in the Supporting Documentation. Follow-up interviews covered staff reactions to the evaluation process and the appropriateness of the CPAI’s design and language to the different context of a European probation service. Reactions were generally positive, to the extent that the Jersey Service would welcome a repeat of the exercise in due course.

The CPAI evaluation carried out with a specialist project for women offenders being piloted by the Probation Service in Wales was again welcomed by the team but produced a number of findings which suggested that women’s services needed a differently designed evaluation framework to take into account the more holistic aims of this kind of project (which typically have a focus on welfare, support and empowerment as well as crime reduction) and a different approach to feeding back evaluation results to improve learning. In particular, the turbulent political context of probation in England and Wales following a controversial privatisation programme was found to be an obstacle to the sharing and use of evaluation findings because staff and managers were concerned that information about their performance could be used to their disadvantage. This had implications for how evaluation outcomes should be expressed and communicated so that recognition of a need for improvement did not become a focus for anxiety.
It was clear from these two thorough pilots of the comprehensive evaluation approach that evaluation needed to reflect the specific needs of local jurisdictions and particular client groups, as well as being carried out in a manner which is sensitive to particular contextual issues which face service providers from time to time. This approach is known as ‘Responsive Evaluation’. These findings were incorporated in the design of what became a new evaluation inventory, the Swansea Service Evaluation Inventory – Women’s Projects (SSEIW). Dr Kerr was the lead designer of the SSEIW and the next steps in this research will involve its wider use, and more feedback on the evaluation process to refine the instrument.