Reimagining Rehabilitation: Beyond the Individual 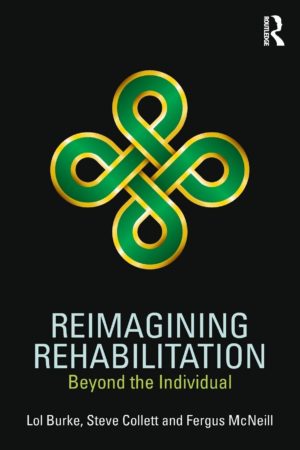 ‘Reimagining Rehabilitation: Beyond the Individual’ is published in June 2018 and written by Lol Burke, Steve Collett and Fergus McNeill. This book aims to make the case for and provide some of the resources necessary to reimagine rehabilitation for twenty-first-century criminal justice. Outlining an approach to rehabilitation which takes into account wider democratic processes, political structures and mechanisms of resource allocation, the authors develop a new model of rehabilitation comprising four forms – personal, legal, social and moral.

Drawing on the conceptual insights offered in the late Stan Cohen’s seminal work – Visions of Social Control – and specifically his insistence that modern social institutions can aspire to doing good and doing justice, the authors argue that these values can underpin a moral pragmatism in designing social interventions that must go beyond achieving simply instrumental ends. Reimaging rehabilitation within the context of social action and social justice, this book is essential reading for students and scholars alike, particularly those engaged with criminal justice policy, probation and offender rehabilitation.

Lol Burke is Professor in Criminal Justice at Liverpool John Moore’s University and specialises in the areas of probation research, policy and practice. He has a particular interest in the way that occupational culture acts out in probation settings and resettlement provision for released prisoners. As a former probation practitioner, he has considerable experience working in both community and custodial settings.

Fergus McNeill is Professor of Criminology and Social Work at the University of Glasgow where he works in the Scottish Centre for Crime and Justice Research and in Sociology. Prior to becoming an academic in 1998, Fergus worked for a number of years in residential drug rehabilitation and as a criminal justice social worker.

Please click on the link for more information about ‘‘Reimagining Rehabilitation: Beyond the Individual‘.